As the only visual effects artist attached to the project, I completed all the creative compositing work for Gillian Armstrong’s most recent feature Women He’s Undressed.

The documentary tells the life story of the Hollywood costume designer and three time Oscar winner Orry-Kelly. His costumes contribute to some of the most magical moments in films such as Some Like It Hot, 42nd Street, The Maltese Falcon, and Casablanca among others.

It was such an honour to work with Gillian Armstrong, who is regarded as something like cinema royalty in Australia. An international audience would be familiar with her Hollywood features such as Charlotte Gray (2001), Oscar and Lucinda (1997) and Little Women (1994), which received an Oscar for Wynona Ryder’s performance. She’s also received numerous wins and nominations for awards such as the Grand Jury Prize at Sundance, Golden Bear at the Berlin Film Festival and the Palme d’Or at Cannes.

Gillian is well known for a sense of theatricality and a somewhat kitschy aesthetic. This approach is then well matched with a tale about the dandy-like figure Orry-Kelly. In line with this I gave the oceans in the various cut-scenes a strong emerald hue, and created almost over-the-top sunset matte paintings for the sky replacements. There were also plenty of more technical cleanup tasks such as duck-removal, given that the shoot had taken place on a river 🤣

For the duration of the project I worked alongside the (also) Oscar Award winning team at Soundfirm, where the final sound and picture was completed.

This project was completed at a time when I still used After Effects as my main compositing tool in a relatively simple prores based Log C workflow. I also got my hands on Neat Video for the first time to restore some of the old film footage. And going in the other direction I used some film conversion LUTs for the first time too for the 16mm treatment effects. I used Mocha at that time for all my roto, and while I’d always opt for Nuke these days for comp work I still prefer Mocha for any heavy roto. 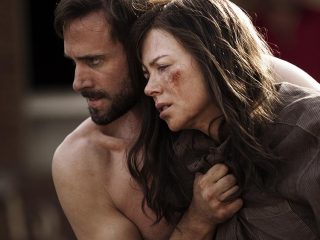